Consumer preferences and government regulations are changing the way you raise livestock and poultry, particularly with regard to the use of antibiotics—no matter where you are located. Yet the need to optimize animal health and efficient growth has never been more important.

The world population has increased to more than 7 billion, 815 million of whom were estimated to be chronically undernourished in 2016.1 As demand for animal protein climbs, so does the need to safely and effectively control the many bacterial diseases that can substantially hamper animal health.

One estimate notes that 80 types of bacteria, such as Escherichia coli, Salmonella and Clostridium, pose serious threats to the poultry industry alone.2 These pathogens are disease-causing culprits in swine, dairy and beef production, too.

Increasingly, due to changing market forces, producers worldwide are focusing on ways to lower their on-farm use of antibiotic tools and searching for non-antibiotic nutritional solutions to tackle animal health challenges and enhance production.

To understand appropriate non-antimicrobial responses to animal disease threats, it’s best to gain an understanding of the challenge faced.

In the case of clostridia, these bacteria are normal inhabitants of the soil and poultry and livestock environments across the world—no region or country is exempt. This means animals constantly ingest low levels of clostridia as a result of its widespread, underlying presence. As bacterial loads rise, animals become increasingly vulnerable to high-stress events, creating a tipping point for disease and performance deficiencies.

For example, to date in the United States, more than 69,000 different clostridial isolates, or strains, have been harvested from thousands of dairy fecal and feed samples. These samples were assayed by researchers at ARM & HAMMER.

The samples were collected from across the U.S. and organized into regions defined by geography and prevailing farm management styles. This created a clear picture of clostridial population diversity in specific regions. Similar collection and testing programs have been adopted for other U.S. animal species, and steps are underway to introduce these processes and solutions to international regions, as well.

The results indicate that both the species of Clostridium and the level of diversity differ across regions sampled.

Regional differences can be attributed to varying soil types, environments, feedstuffs, animals and management styles. Taken together, these elements form the Microbial Terroir™, or microbial makeup, of the region or an individual farm. Differences in Microbial Terroir help explain why certain challenges plague some areas more than others.

This same principle applies to environments and different animal species everywhere—parallel collection and testing programs for poultry and swine show similar results in bacterial diversity by farm, complex and region. The difference lies in the diseases that afflict the different species—necrotic enteritis in the case of poultry versus HBS in cattle, for example.

The aim, then, must be to limit the clostridial load on your farm or complex and change your farm’s pathogen profile to prevent herd or flock health and performance issues.

The robust farm sampling and analysis program undertaken in the United States has also provided a solution for combating clostridia on a regional and individual farm or complex basis.

Bacillus have coexisted with clostridia in the soil for eons and are their natural enemies; long-term use results in changes to clostridial population levels and species diversity.

The important lessons are:

There’s a reason animal agriculture is so focused on gut health.

As Australian researchers note, “The nutritional and health status of poultry are interlinked with gut health which includes immune system, gut microbial balance and macro and micro-structural integrity of the gut. The health of the gastrointestinal tract affects digestion, absorption and metabolism of nutrients, disease resistance and immune response.”3 Researchers of swine, dairy and beef, share similar sentiments.

To aid in the quest for non-antibiotic solutions that help enhance animal health and productivity, producers are increasingly turning to Refined Functional Carbohydrates™ (RFCs™). RFCs have been shown to offer many benefits that may be associated with gut health and immune response.

RFCs are the components harvested from yeast cell walls (S. cerevisiae) using specific enzymes during a proprietary manufacturing process. This enzymatic hydrolysis yields MOS (Mannan Oligosaccharides), Beta 1,3-1,6 glucans and D-Mannose—all of which are readily bioavailable in CELMANAX™ due to this proprietary process. Research4,5,6,7 shows that each RFC has a specific mode of action and outcome when fed to livestock.

A recent trial8 examined the effects of RFCs on turkey poult performance when they were placed in stressful production environments. During the trial, 204-day-old male turkey poults were distributed in completely randomized replicated pens/treatments.

One point to note. In North America, feed efficiency is calculated by dividing feed intake by weight gain. The lower the number, the more efficient the flock in using the feed supplied. In some other parts of the world, feed efficiency is calculated as weight gain divided by feed intake. In that instance, higher numbers represent a more efficient feed conversion.9 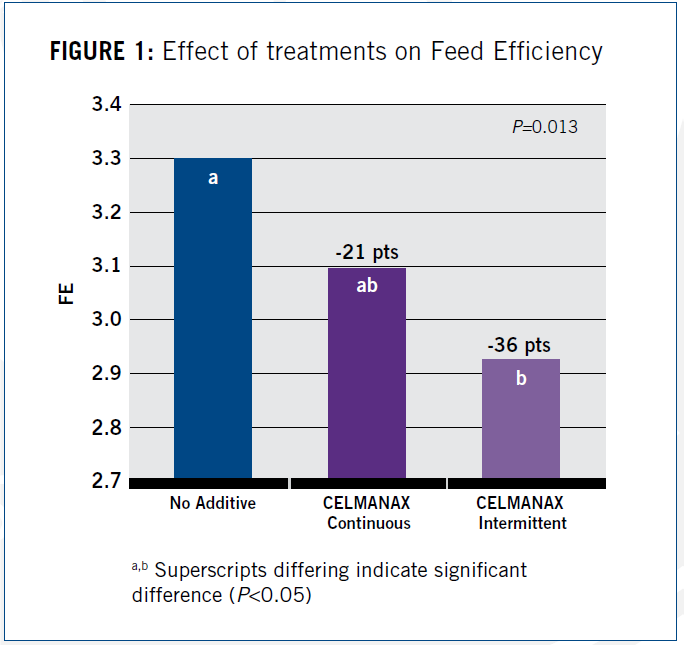 Additional trials explored how RFCs helped broilers improve performance in the face of health and environmental challenges, as well.

In this instance, the researchers examined the effects of clean water, mycotoxins and coccidia, as well as RFCs (50 g/MT), on broilers. The basal diet contained on average 50 ppb aflatoxin, 0.4 ppm deoxynivalenol (DON) and 2.7 ppm fumonisin. Treatments included new or used litter, clean or unchanged water and diets that did or did not include a coccidiostat.

Therefore, including RFCs in an animal’s diet throughout their life cycle can help improve immune function by providing a defense mechanism against pathogenic bacteria. As a result, RFCs can help maintain gut health and overall animal health, boosting immune response.

1 Food and Agriculture Organization of the United Nations. The State of Food Security and Nutrition in the World. 2017. Available at: http://www.fao.org/3/a-I7695e.pdf. Accessed February 14, 2018.

6 Brake JT. Effect of CELMANAX supplementation in diets naturally contaminated with aflatoxin and DON on broiler performance. Report on file. 2012.